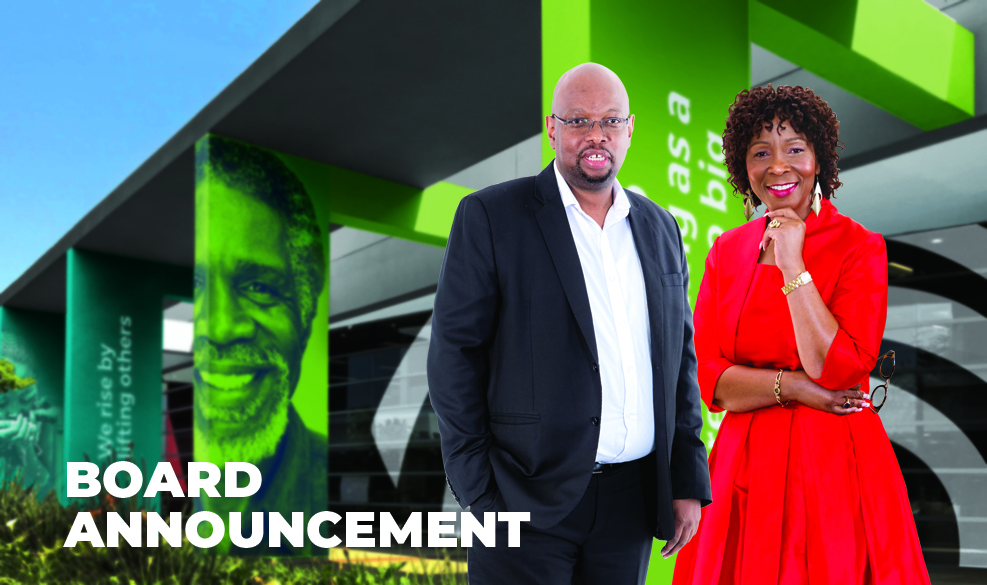 Bigen, a leading African infrastructure development group of companies, has announced the retirement of current CEO Dr Snowy Khoza, who has been at the helm since October 1, 2010, holding the distinct roles as the group CEO and Executive Chairperson of Bigen Africa Group Holdings. Dr Khoza will be going on a well-deserved and planned retirement on December 31, 2021, and will be handing over the baton to Luthando Vutula as CEO incumbent on August 1, providing ample time to complete a proper hand-over before he fully takes over the helm on October 1, 2021.

Internationally acclaimed as an astute business professional and the recipient of numerous prestigious local and international awards, including being named as one of Africa’s most influential women in 2020, Dr Khoza was the first female in South Africa to lead a major infrastructure development company.  During the past 11 years, Dr Khoza was particularly successful in spearheading Bigen’s repositioning from a conventional South African civil engineering firm to an African infrastructure development leader in the deliberate pursuit of improving livelihoods for the people of Africa.

Mr Kelepile Dintwe, non-executive chair of the Bigen board, pronounced Dr Khoza as a dynamic and inspiring visionary with remarkable leadership acumen and in a recent public announcement, said:  “The immeasurable business value created by Dr Khoza during her tenure at Bigen can never be overstated, which spans across a successful growth phase of the business to navigating the global economic shakedowns within the built and environment sector seen over the past three years, and recently the obvious impacts of the COVID- 19 pandemic. On behalf of the Bigen board and shareholders of the company, I would like to thank Dr Khoza for her years of dedication, passion, commitment with integrity and vision to bring the company where it is today.”

Dr Khoza described her tenure with the Bigen Group as a humbling journey of reaching new pinnacles of success and of immense fulfilment, especially considering the remarkable difference Bigen has made to the livelihoods of millions living on the African continent.

“There are no words that can express how sincerely grateful I am for the privilege and honour to have been part of the Bigen family for the past 11 years.  Together with an exceptional board of directors, visionary leaders, shareholders, loyal clients and steadfast employees, we have reinvented and strengthened Bigen to the point where we are now regarded as a leading champion of the infrastructure development impact agenda in Africa. Together, we have not only improved the quality of life of millions of people across the African continent but also earned a solid reputation as the partner of choice in helping the continent achieve its Sustainable Development Goals (SDGs) by 2030,” she says.

Entering a New Era of Leadership

“Starting a leadership transition process over the next two months brings to a close a remarkable era of growth, transformation and sustainable business reinforcement under the admirable leadership of Dr Khoza, and opens the doors to the continued shaping of the Group into a new growth trajectory,” says Dintwe.

“Mr Vutula is a highly revered and successful business leader with extensive years of experience in similar markets to Bigen, and we look forward to him building on the solid foundation and momentum achieved by the outgoing CEO and the Bigen leadership team.”

Previously the CEO of Ubank, Vutula hails from an impressive business background where he has held senior executive and non-executive positions in major South African development, management and finance companies, contributing at the main board level to the setting and implementing of strategic policies. He brings to the table years of experience, business acumen and leadership skills honed from leading high-performance teams and extensive exposure to infrastructure development on a national and international level. Having established networks in all tiers of the South African government, Vutula is involved with various multinational agencies and diplomatic circles in Africa, Scandinavia and North America, as well as donor agencies such as the United States Agency for International Development and the European Union.

Before accepting the position as CEO of Bigen, Vutula held the positions of CEO at well-established financial services provider, Ubank, Head of Sectors at ABSA Retail and Business Bank, Managing Executive ABSA Home Loans, and MD of ABSA DEVCO. Prior to joining ABSA, he served on the executive level at the National Housing Finance Corporation, where he was responsible for a number of portfolios.  He chaired several boards in both the private and public sectors.

“I am honoured to follow in the impressive footsteps of my predecessor, Dr Snowy Khoza,” says Vutula. “During her dynamic tenure of eight years as CEO and three years as executive chair of Bigen, she accomplished remarkable feats and developed Bigen from being a South African based consulting engineering firm, to a driver of socio-economic change across Africa through innovative, solutions-focused engineering, advisory and infrastructure development. I am excited to continue her legacy, and while some things may change, certain things will always be prioritised in our decision-making: our people, our continent, creating wealth for our stakeholders and leaving a legacy we are proud of.”

The Bigen Group has, since its inception 50 years ago, earned a solid reputation as an innovative, solutions-focused engineering and infrastructure development partner and employer of choice, invested in the future of Africa. Throughout its journey of half a century, the group has grown and transformed into a leading infrastructure development group of companies with its headquarters based in Mauritius and South Africa. The group operates from eight regional offices in South Africa and has an office presence in Kenya, Ghana, Botswana, Mozambique, Namibia and Zambia. Regarded as a powerful change-maker in the agricultural, water and sanitation, real estate, transportation, energy, health, and development advisory sectors, the group responds to the continent’s socio-economic development needs with a blend of financial, technical, environmental, development impact and advisory and institutional services.

Bigen has evolved to become extremely adept in achieving a keen balance between profitability and its passion for beneficiating community well-being aligned with helping the continent achieve its SDGs by 2030. Achieving these goals has become especially critical since the outbreak of the COVID- 19 pandemics which, according to a World Bank report, has forced up to 40-million people living in Africa into extreme poverty. This is severely impacting the achievement of the SDGs, of which SDG1 (no poverty by 2030) is suffering the largest setback.

South Africa’s post-lockdown economic recovery plan, as announced by President Cyril Ramaphosa, includes a particularly strong focus on infrastructure development to boost investment and growth.  For all of Bigen’s directorates, this strategy holds much business potential in the countries of the African Continental Free Trade Area and  Bigen is involved in six of the 62 strategic integrated projects (SIPs) gazetted in July 2020 namely:

“There is an enormous opportunity for the Bigen Group, to not only rebuild Africa in the aftermath of COVID-19 and the recent South African civil unrest and plundering but also to assist Africa in reaching its 2030 Sustainable Development Goals.  Although we are filled with mixed emotions having to say goodbye to the iconic Dr Snowy Khoza as CEO, we are also looking forward to        Mr Vutula joining our family and helping us to achieve continued success,” says Dintwe.

“Because of Dr Khoza’s drive and distinguished ability to turn Bigen into an infrastructure development leader, we are ready to take on the future with unstoppable enthusiasm and vigour.  We are confident that as we say goodbye to one remarkable visionary and welcome another, we will open yet another chapter of ongoing success and build on our legacy of satisfied clients across Africa.”